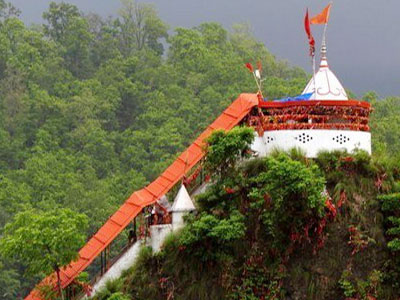 Kartik Purnima is a fair of lamps. The Garjiya Temple, fully decorated with diyas lit by the devotees and worshipers during the fair, gives a splendid panoramic view over the Kosi River, which definitely demands a visit to this divine goddess temple at least once in a lifetime.

Dhikuli is a very old rural area situated near Ramnagar and the history of Garjiya Devi Temple is mainly associated with this place according to the stories and beliefs of the people of Ramnagar. Being one of the sacred Shakti Peethas of the region, Garjiya Devi Temple claimed to have links with very old royal families like Katyuri, Kuru etc.

The Mool and Garjiya Devi Temple is 12 km from Ramnagar, and was built as a temple construction only in 1940. First discovered in 1840 by the rulers of Ramanagara, Katyuri, this temple has been sheltered and rebuilt many times by the temple organization till now, hence offers a wonderful infrastructure considering the crowds that increase year after year. Anthropological surveys and other studies about the cultural heritage of Nainital suggest that the people of Dhikuli were influenced by the Indraprasta culture over time.

Garjiya Devi is the main shrine and idol of the temple and there Sita Bani, Anasuya Devi and other goddesses are worshipped. People from North, South, West and East of India never miss a chance to pay homage at the temple whenever they visit Jim Corbett National Park.

The relevance of the timing of the festival at the Garjiya Devi Temple is that it coincides with the famous Sikh festival Guru Nanak Jayanti, which at that time draws huge crowds to Ramnagar, Uttarakhand. The history of Garjiya Devi Temple reveals that the place has divine powers, whereby devotees fulfill their wishes and make offerings to the Goddess, who protects them even in the worst of circumstances of an adventurous trip to the temple.