Hanuman Dham is a Hindu temple which is located in Anjeel village Chhoi, which is 5 km away from Corbett city and Haldwani road, according to the epics this is the village where Lord Hanuman took birth and this village got the name of Ma Anjana( mother of Lord Hanuman). Hanuman Dham is one of the best examples of Services which are being offered by Hanuman Dham Trust. This temple is situated on the bank of the Kosi river and dedicated to Lord Hanuman, one Maha mritunjaya Vatika is also here in which the status of Mahakala is situated. On Hanuman Jayanti, a big fair takes place here and people make offerings. This temple has a main hall which has an idol of lord hanuman and his childhood images and Lord Rama during his exile time and apart from this lord Shiva and Mata Shakti temple are also here. On the right side of this temple, an orphan home and old age homes are here in which helpless people will get a place. This is the point which is rising as a big tourist hotspot in Ramnagar. People who believe in Hindutva and Lord Hanuman come here to get his offer. Tourists from other countries show their interest to come and join pooja in this temple. One of the main themes of this Dham is that on every Harela this temple promotes a greenery plan and donates trees in this order on Harela people plant the plants in the temple area and other sides as well. 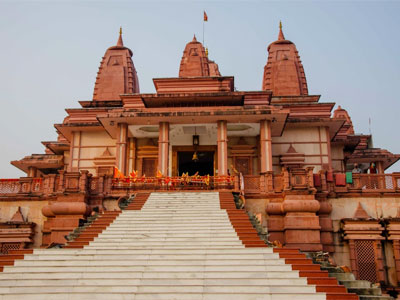 Hanuman Dham is one of the most popular places in Ramnagar. The architecture of Shri Hanuman Dham in Ramnagar is magnificent both internally and externally. This famous tourist attraction of Ramnagar has an arched entrance of the temple depicting two fishes at the entrance which is a symbol of luck and prosperity.

Hanuman Dham is the center of service and devotion under construction in Anjani village Chhooi, adjacent to Ramnagar of Nainital district. It is said that this temple is not only in India but the only temple in the world, where twelve forms of Bajrangbali are seen including their twelve pastimes. This Dham will be made the most beautiful Dham in the world.